IT STARTED WITH A DARE
JOYRIDE
LOSING IT 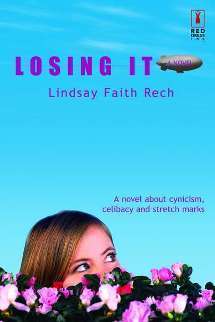 Everyone thinks Diana Christopher is losing it. Considering she’s just driven her car into the front window of Davey’s Café, they might be on to something. All Diana wants is to be normal—but life for this 32-year-old waitress is anything but. Since the death of her father two decades before, Diana has looked for consolation in donuts, strawberry shortcake and cheese curls – anything to avoid looking at her past. With 50 pounds to lose, she knows she’s become a huge disappointment to her mother, and herself. An unlikely friendship with her 93-year-old neighbor gives Diana the courage to shed the bulky barrier she has put between herself and the world, and soon, she’s getting attention from a certain pool-playing god at a local singles bar. But after the unspeakable happens, Diana begins to examine her past and finds that losing it is the only way she can truly be free. In this debut novel, Lindsay Faith Rech weaves subtle beauty and wit with honesty and hope, as Diana breaks through the burdens of the past and becomes the sexy siren she was born to be.

"highly readable and satisfying...if you pick up this book, be prepared to be touched and maybe even moved to tears." - chicklitbooks.com


"Expect to lose time when you start this novel because you're not going to put it down until it's finished." - A Romance Review


"LOSING IT is a sweet, emotional read; the tenderly written Diana is an inspiration for anyone who's been dissatisfied with her life." - Pittsburgh Post-Gazette